About the house / about us 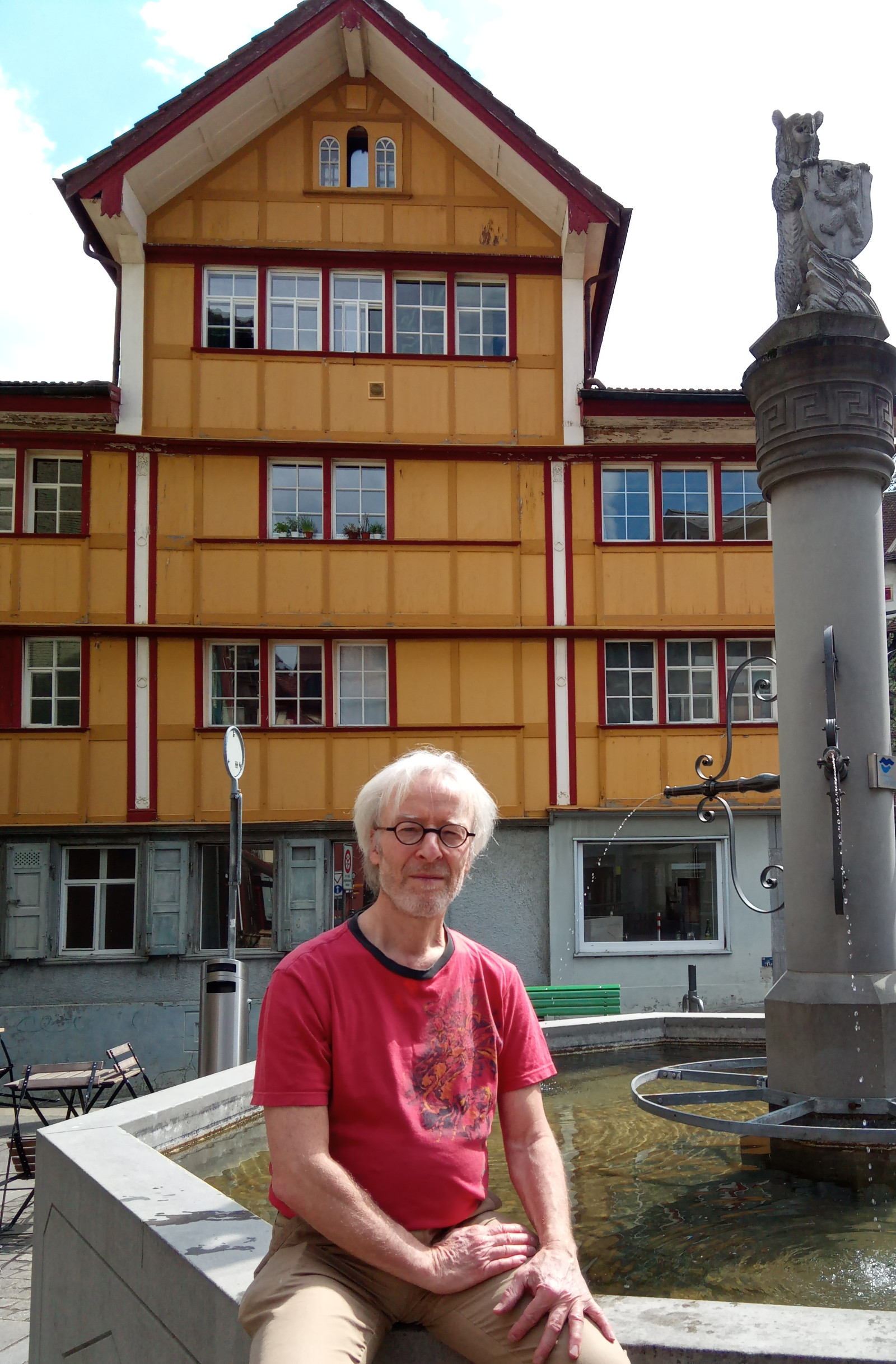 The house was built on earlier foundations after the last village fire in 1560. Maybe there were then two elongated, parallel buildings of 1-2 storeys high, similar to the house with the hairdresser's shop attached to the south, which is still there today. The house "Bazar Hersche" on the other side of the street was also a longitudinal building.

Josef Anton Keller, my great-grandfather had bought the house about 120 years ago and ran a grocery store there. From then on it was called "Konsum Kellers". Individual living areas of this house were rented out temporarily as guest rooms or for longer periods as rented apartments.

Two daughters of Josef Anton Keller were already enthusiastic mountaineers and ski tourers from around 1912. They named the yellow house "Marwies" after a mountain in the Alpstein. Old skis and other mountaineering equipment are exhibited in the staircase as a reminder of this. Here and there old advertisements or other material from the former colonial goods shop can be seen.
In 1997 I was allowed to inherit this house from my ancestors. A bookshop rented the shop for about twenty years before moving to larger premises on the main street.  On the upper floors I lived with my girlfriend at the time. Most of the rooms were in a very basic condition and were hardly ever used, except now and then for a holiday camp or a workshop among friends.

In the future I would like to live with some friends in a kind of co-housing and co-working, where everyone rents 1-2 rooms in the house, has his own bathroom and uses 1-2 common kitchens. After the renovation, the house has retained the structure for a large family and thus fits in with these intentions. Probably there will still be a guest room or a holiday flat.  The remaining guest rooms are waiting to accommodate suitable residents of the house community. In the off-season, interested parties will be able to try out living or participate in a workshop.  The empty business premises on the ground floor and the cellar will preferably be rented out to members of the co-housing, whether for health purposes or as a salesroom. We could use the cellar vault for cultural events. This way the house makes it possible to live and work together.
If there is no solution in co-housing and co-working by summer 2021, the premises will probably be rented out conventionally.

I was born in 1958 and was given the name Remigius, for whom the short form Remi is common. As a child with my parents and later alone, I lived in several areas of Switzerland and enjoyed getting to know foreign cultures during several months of travel. Lifelong learning has been my intention since I was a teenager or adult. My first education as a secondary teacher was later complemented by cultural history, computer science, project management, coaching, training, couple and sexual counseling, and Eastern and Western meditation practice. I occasionally give workshops in-house, in other locations and online. For about twelve years I have been reducing my professional activities and devoting myself more to charitable work. I would like to make what I have learned more complete and essential by adding further topics and fields of activity. Currently I am also working on the renovation and future use of the house and the guest house. Floors 2-4 in the yellow building at Poststrasse 1 were converted between 22 October 2018 and the end of July 2019. The renovation of the lower floors is to be continued in spring 2020.

The house is to retain its historical charm, while at the same time meeting today's requirements for comfort and safety.

Insulation, stabilisation and individual corrections have now been installed on the upper floors. Floors, walls and ceilings have been restored. The old building fabric is now even more clearly and beautifully visible after the renovation. We have also selected building materials that are as natural as possible and have ensured that the electrical wiring is well shielded to increase the comfort of living. In one room, paintings with plant ornaments and old wallpaper have come to light. Restorers have stabilized the paintings, and the carpenters have covered them with a planking afterwards. On this panelling we will point out the paintings behind it by means of illustrations. The eastern part of the house consists of an elongated stand construction with plank walls. The western part of the house is constructed in knitted construction.
Tiled stoves are still present in two rooms. The new electric stove in the kitchen joins the wood stove from the early 19th century. In six rooms the baroque wood panelling on the walls and ceiling is partly shown with profiled rods, while one of them is still about a hundred years older due to the easier processing. In one room a parlour buffet is installed. In one bedroom and in the upper two middle rooms the panelling from more recent times has been removed. There the original wooden construction can now be seen on the walls and ceilings. The middle room on the second floor has an early baroque coffered ceiling, which has been given a new coat of paint in red and green. In a small area, the earlier paint coats are shown.

When the old wooden floors were uncovered, narrow stairways from the basement were found in three places. In the upper floors the floors were reinforced and insulated. Two of the rooms were given back their old wooden floors newly planed, while in the remaining rooms new floors of wood or cork were installed.

In the screed the old pulley block could be preserved. Also the front windows and almost all previous windows were allowed to remain and received a new coat of paint. The narrow, long corridor to the toilet on the second floor still reminds of the old latrines of earlier centuries. The baroque staircase has been given a new coat of paint that interacts with the coffered ceiling. The staircase to the second floor after the restoration 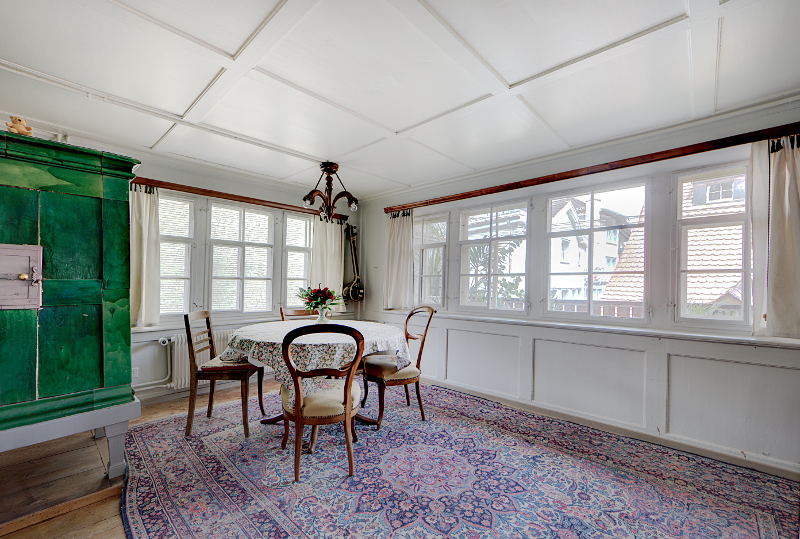 I will sort out, give away, restore, possibly sell, dispose of, objects of the house. If you are interested, you are welcome to arrange an inspection with me.